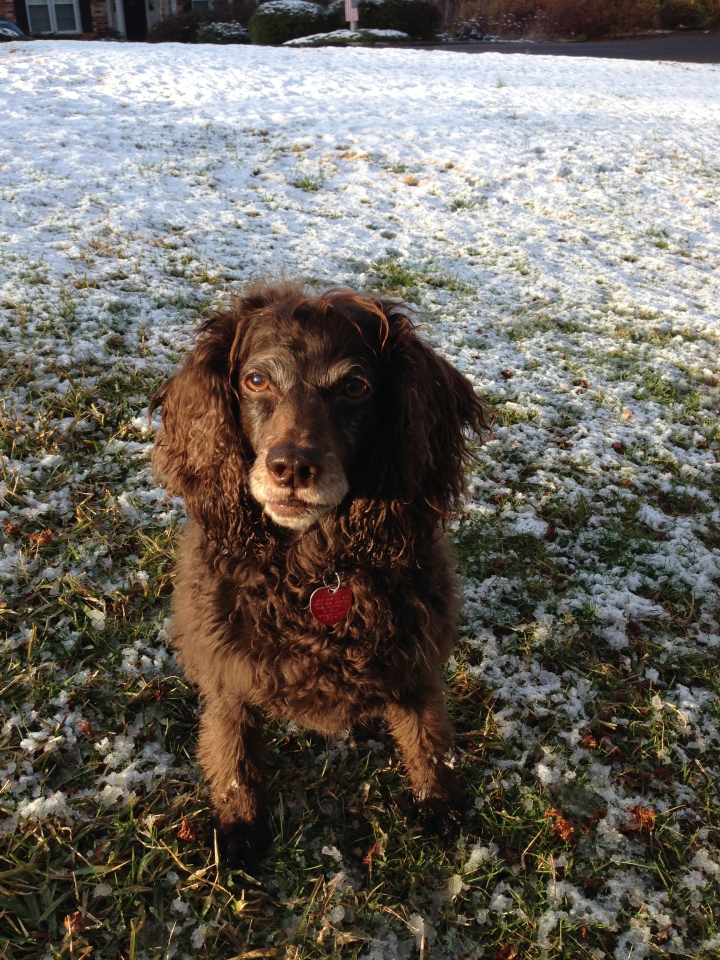 When I woke this morning I wondered if Bill had taken her downstairs yet, but then the memories of the events from the previous night flooded in and threatened to overtake me.  Going through the morning routine, I made my way to the coffee maker then ventured out to my usual spot on the back porch, realizing that something was missing. No, not something. Someone. Returning home from church hours later, I opened the door into the kitchen with a start. Lying just inside the door was a brown paper bag of clothes I had placed there, but for a quick moment I thought it was her. This someone was our beloved Zoe, a beautiful, gentle Boykin Spaniel that was a true gift from God.

She joined our family as a tiny puppy in 2003 and gave my husband, son and me nearly 14 years of pure joy.  We named her Zoe which is the Greek word for “full of life,” and she lived up to every bit of her name! It really is true that dogs are man’s (and woman’s) best friends. But last night, she joined all the other dogs we’ve had over the years in heaven.  Yes, I believe pets are in heaven.  The bible says in Romans 8:20-21, “Against its will, all creation was subjected to God’s curse. But with eager hope, the creation looks forward to the day when it will join God’s children in glorious freedom from death and decay.” Pets are part of God’s creation and because he loves us, not only did he give them to us to enjoy on this earth, but I believe they will be in heaven for our enjoyment as well.

I don’t know if it’s because I’m older, but her death hit me so much harder than that of our other pets.  Maybe because she was a constant companion to me during my “stay at home mom” years.  This past year we started verbally speaking about her eminent passing.  My husband just kept saying, “I don’t know what I’m going to do when Zoe dies.”  In my mind, I was going to be strong and not fall apart, after all she’s just a dog. NOT!

We bought Zoe with the intention of breeding her as we had three times in the past with our Springer Spaniel dog, Cocoa.  The Boykin Spaniel breed has had a history of high incidences of hip dysplasia, so it was strongly suggested that we have Zoe tested before we bred her. Unfortunately, her test results showed a mild subluxation of the hip joint, so we chose not to breed her. Although my husband is a hunter, he never used her as a hunting dog, which is what Boykins are bred for. She was content to just be a pet, protector, friend and companion.

The hip subluxation did not seem to ever slow her down.  She retrieved tennis balls and Frisbees with top speed even a few weeks before her passing.  But in this last week of her life, we noticed that she was having trouble maintaining a standing position.  By the end of the week it warranted a visit to the vet.  He put her on Prednisone and said she may show signs of improvement the next day. He was right!  After getting a cool bath outside, Zoe felt frisky and ran to greet me when I returned from the store.

This playfulness would not last long.  Within a few hours, out of the blue, she had a seizure on our living room rug.  We held her, wiping her face with a wet rag as her helpless body convulsed and she stared at us with begging eyes as if to say, “make it stop!”  My husband broke down with tears and lovingly assured her it was ok, but in his heart he knew it was not ok and this was the end.  I was still holding on to the hope that she just needed some medication for the seizures and she would be her old, wonderful self again. After three seizures within a few hours, we took her to the emergency animal clinic. (Our vet was closed because it was Saturday night). Zoe had a seizure there and they immediately took her back to administer seizure medication to calm her down. It was then that Bill and I made the painful decision to end her suffering.  If she had been younger, it would have been different.

The clinic staff were so compassionate and tender with not only Zoe but us as well. The seizure medication had calmed Zoe to a restful state, so when the propofol and euthasol was administered into the IV already in her leg, we watched her close her eyes and fall asleep for good.  With tears streaming down our faces, we hugged her one last time then gave her to the vet to wrap in a blanket for us.  Their kind act of placing her in a little white cardboard box shaped like a coffin, made it a little easier to carry her home to be buried.  The clinic staff also made a clay paw print with her name inscribed on it. God sure had some special people working there that night.

Carrying our precious cargo out to the truck, Bill was reminded of the day he drove over 150 miles to get Zoe as a puppy.  They bonded as she sat in his lap all the way back to Greer. Now years later he was again driving her home to her final resting place.

On the way home, I texted our son who is away at college.  He never has been one to verbally express his feelings, and this time he couldn’t even text them.  I’m sure he was as distraught as we were and I wished he was home so that we could all comfort one another.  He did tell me the next day that he just went to bed early that night.  That was very telling about his state of mind because he never goes to bed before 11:00 pm.  As an only child, Zoe was like a sibling to him.

Although it was very late, we wanted to get Zoe to her resting place as soon as we got home.  As I held the flashlight, Bill dug the hole all the while crying and talking to Zoe and God.  He gave thanks to God for the many wonderful years we had with Zoe and he begged God to send her to heaven.  I love that man!  He has such a sensitive heart and is not ashamed to cry.

We finally went to bed after midnight. I took Advil for my hip pain and it helped me sleep some, but Bill tossed and turned all night.  It’s now day two without Zoe and I still feel her presence in the house. I know this will be normal for awhile, but I don’t like normal right now. I’m still looking for her on the porch and wondering if Bill fed her before he went to work this morning. I’m still heading to the back door to put her outside as I get ready to leave the house. I’m still feeling the burn in my eyes from the flood of tears and I’m still aching inside for the little brown dog who was so full of life!

The Hope within me is Jesus Christ my Lord. As His child I am called to this One Hope and that is what I want to convey in my posts. Some may be serious and some a little humorous, but all have Christ and His word at the center.